This February San Mateo Libraries will be presenting the 2017 Comic Arts Fest! SDP’s own Tyler Cohen, cartoonist behind Primahood: Magenta, will be appearing in a special panel discussion at the Half Moon Bay Library, Bay Area Women in Comics, February 11th at 5:30 PM! She will be appearing alongside Liz Mayorga and Shaenon Garrity for a lively discussion of their work. 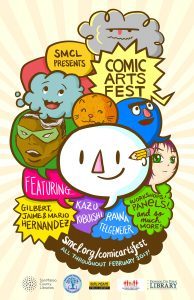 Tyler at the 2017 Lambda Litfest in Los Angeles!

Primahood: Magenta is in the running for a Lambda Literary Award this year, but while we wait for the judges’ decision, come see Tyler at the Lambda Litfest in Los Angeles! She will be appearing on the panel discussion MUTHA UP AT LAMBDA LITFEST! STORIES OF MODERN QUEER PARENTING FROM MUTHA MAGAZINE, March 9th at 7:00 PM at the Poetic Research Bureau! Other panelists include Elizabeth Earley, Jillian Lauren, Carla Sameth, and Wendy C. Ortiz! Come out for a great discussion and get your personal copy of Primahood: Magenta signed by Tyler herself!